skip to main | skip to sidebar

Now You're Thinking with Portals

So, finally, after a lot of work and testing, the Clan Lord account portal has been re-opened for business.

What completely blows my mind on this whole project is that a group of players contacted the GMs and totally offered to build this portal from the ground up for free.  And they wished to remain anonymous: no glory, nothing expected in return.  They were just passionate members of the Clan Lord community who wanted to keep the game alive and playable for a little while longer.

It's selfless actions of this kind that makes me fall in love with our little community all over again.
Posted by Yappy at 3:16 PM No comments:

Sunstones in the news

From HelpfulGM: Scientists Think They Have Found The Mythical ‘Sunstone’ Vikings Used To Navigate Warships.

I had no idea that these things were real!
Posted by Yappy at 10:15 PM No comments:

I had a script working absolutely fine (by which I mean it worked "mostly fine"), and then I made some changes to it which involved the inclusion of some diagnostics.

And then the Bad Things began.

My diagnostics printed out all of the data collected by the arrays, and that data was incorrect.  "Math," I cursed, and started debugging.  Socks recently supported negative indexes (which means instead of writing my_array[ index - 1 ], I could instead just write my_array[ -1 ] ), and I was convinced that my array index pointer was somehow falling into a negative number.  I added more diagnostics.  The correct answers were being displayed correctly with these new diagnostics, but the data was still wrong within the summarized diagnostics.

Three days of debugging and I found the problem: my script was absolutely fine, but my summary diagnostics were looking at the wrong sets of data types.  Once I corrected that, then all of the data matched.

I am such a chucklehead sometimes.
Posted by Yappy at 10:11 PM No comments:

I've spent the past three days working on some new scripts.  One of the scripts required (ugh) math.  And not just X + Y = Z kind of math, but more like the A² + B² = C² kind of math.  I needed to draw some circles, but I forgot how to do that.  And by "forgot" I really mean "I was never really clear on how to do this in the first place."

So I asked Mr. Google.

Google returned, what turns out to be, a very good site: Math is fun!  The particular section that I needed was help on sines and cosines, and the mathisfun.com site explained these functions very clearly and simply.

Thanks to both mathisfun.com and Google for the help.  My script is behaving just as I had envisioned it behaving -- perhaps a little bit more.  I'm really excited, and look forward to finishing the script.  The hardest part has been done: arranging objects in circles on the screen!
Posted by Yappy at 7:11 PM No comments:

Tonight I tried a soft-open on a new monster type that I had discussed in the past.  While this whole concept is still in its testing phase (and I am aware of several bugs, so I know that this concept is far from being finished).  I was very pleased to see that my new monster template worked as intended. 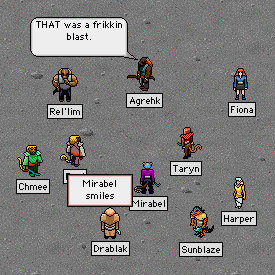 Thanks to everyone who (unwittingly) participated!
Posted by Yappy at 12:26 AM No comments:

I just wanted to say that the Clan Lord community has some great artists.

Not only will these artists take last-minute requests, but they will deliver it in time for the update packaging.

I am really excited for the upcoming update.  Too bad that most of the content is still in testing.  But it will look great.
Posted by Yappy at 12:49 AM No comments:

Yappy
I am an associate game designer for the MMORPG game Clan Lord.